He was only meant to be a hookup. Until he became my coworker.

Only I could ruin the hottest potential hookup ever. One look at the gorgeous ginger, and I was done for. I summoned every bit of courage I had, then panicked. As is my way. I managed to put it behind me until he became my new coworker. Now, every day is a reminder of my insecurities and what might have been.

Working so closely together, Henry and I become fast friends. We have so much in common, but he’s very clear that relationships are not on his mind. The attraction though, that’s undeniable. When Henry offers friends with benefits, there’s no way I’m saying no. Did I mention I’m a virgin?

All I have to do is keep a level head and my feet on the ground. We have a blast together, but before long, the line between friendship and love blurs, and I’m drawn in by his gravity.

The question remains… Is he drawn in by mine?

Gravity is a steamy, low angst, hook up turned surprise coworker, friends with benefits, first time romance featuring a Sinatra-loving old soul, a sweeter than sugar virgin, nerding to the nth degree, and rain-drenched kisses. It is book 2 in the Written in the Stars series, featuring science-loving nerds and the men who fall for them.

Also available in the Written in the Stars Series bundle here. 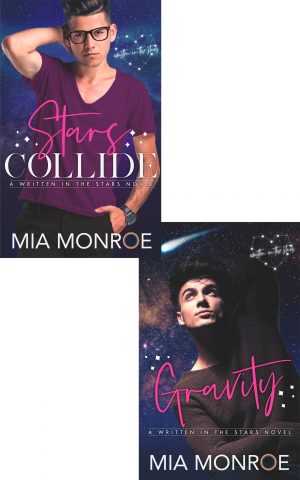 4 in stock (can be backordered)